The End of The World

From vertigo-inducing Andean passes, turquoise-blue lagoons and massive glacier fields down to the endless windswept plains and tundra-like landscapes of Tierra del Fuego, Patagonia is the ultimate playground for motorcycle riders both on and off the road. 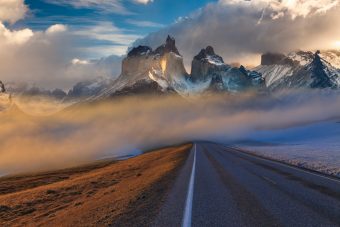 Motorcycling in Patagonia is adventure in its purest form: forget busy highways with convenient fuel stations and roadside cafes, bustling cities and fast…

Combining two of South America’s most stunning roads, the Ruta 40 in Argentina and the Carretera Austral in Chile, our Patagonia motorcycle tours are designed to take you off the beaten path and into the wilderness.

Jaw-dropping views and pristine nature aside, motorcycle riding in Patagonia is also about the local culture and traditions that run deep. Gauchos, the iconic Patagonian cowboys, still roam the Southern plains and mountains astride their sturdy criollo horses, and sampling the traditional Argentinian asado – grilled steak – is an experience to die for. Exploring this remote corner of the Earth on one of our Patagonia motorcycle tours, you’ll ride some challenging roads, meet extraordinary people whose way of life is slowly fading away, and experience an adventure of a lifetime traversing this untamed country on two wheels.
Whether you prefer riding big adventure bikes such as the BMW R1250 GS, performance enduro machines like the KTM 450 EXC or the smaller adventure bikes like the Royal Enfield Himalayan… if you’re looking for an incredible ‘off-the-beaten-track’ motorcycle holiday in some of the most stunning & interesting countries on the planet, you’re in the right place. Simply get in touch with us to discuss your preferred motorcycle tour and we’ll take care of the rest, ensuring you have a life changing experience, whichever tour you choose!

What is the riding like on a motorcycle tour of Patagonia?

Riding motorcycles in Patagonia is much more like an expedition rather than a leisurely tour. Whether you’re on a dirt bike or a mid to large capacity adventure motorcycle, expect lots of gravel roads, mountain twisties and graded dirt, especially in the South. ‘Ruta 40’ on the Argentinean side is mostly paved with a short gravel section here and there, but the Carretera Austral and most of the routes on the island of Tierra del Fuego are dirt roads meandering across the land.

When embarking on a motorcycle trip to Patagonia, beware of the notorious gale-force winds in Southern Patagonia: most motorcyclists who have ridden to Ushuaia and back will tell you to expect the seemingly never-ending winds forcing you to ride at an angle bracing against the sheer force of the gusts. Even in the summertime, Patagonia sees chillier temperatures, so layer up before you go and expect cooler weather – after all, you’re now closer to the Antarctic than the equator!

Despite some challenging roads and weather conditions, the riding in Patagonia is out of this world. The Chilean side boasts landscapes worthy of a Lord of the Rings set with the snow-capped peaks of the Andes looming over the bright blue lakes, emerald green foothills and fjord-like bays resembling the Norwegian coastline. On the Argentinean side, the Patagonian pampa stretches out as far as the eye can see, contrasting wildly with the cool shades of blue of the majestic Perito Moreno glacier near El Calafate. Tierra del Fuego, the Land of Fire, is an island of incredible wildlife, stunning mountain passes, and the views of the Drake Passage – the World’s most volatile sea route – separating it from the Antarctic continent.

Our Patagonia motorcycle tours are designed to showcase it all: the remote roads and dirt trails leading past surreal landscapes, the local ways of life, the delicious cuisine, and the natural wonders that are Torres del Paine National Park and the Perito Moreno glacier. You’ll see the Patagonian wilderness up close and personal, stay in charming colonial towns and frontier settlements still retaining the spirit of the gauchos, and visit Ushuaia, the southernmost city in the world.

When is the best time of year for a motorcycle tour of Patagonia?

Patagonia lies in the Southern Hemisphere, which means the seasons here are reversed (depending on where you’re from, of course!). Motorcycle travellers who forget this little fact pay dearly – Patagonian winters are harsh and the region receives heavy snowfall, so aim to ride here between early December and late February for the best weather conditions. Keep in mind that Patagonia is vast and the distances here are long, so plan at least several weeks to see it all.

5 reasons to ride in Patagonia

Riding motorcycles in Patagonia is like traveling some forgotten planet with incredible scenery and awe-inspiring views around every corner. Active volcanoes, Andean passes, glaciers, national parks brimming with wildlife, the vast open spaces of the Southern pampas, the eerie landscapes of Tierra del Fuego and the marble caves of Chile Chico will blow your mind as you ride across this magnificent land of horsemen and mountains.

A motorcycle adventure is all about the unbridled freedom to ride, explore, spend evenings under the starry skies listening to the crackle of a bonfire and swapping stories with your riding buddies. And in Patagonia, the freedom is truly unlimited: forget busy roads, traffic and restrictions, leave the stress of a fast-paced life behind and immerse yourself in a culture and land that has no boundaries and no road signs for thousands of miles. Our motorcycle tours in Patagonia are aimed at riders longing to experience the thrill, the scenery and the adventure to the fullest.

Patagonia is most known for its gaucho culture, the traditional horsemanship and settler towns celebrating the colonial heritage. However, it’s also a land of the indigenous Tehuelche, Mapuche people and the vanished Selk’nam tribes. In fact, Patagonia owes its name to the indigenous hunter-gatherers whom the Spanish colonists named “Patagones” – “Big Feet” – because of their rumoured giant size and muscular physique. Although many of the indigenous peoples have perished, the Mapuche culture is still going strong and you can explore the Patagonian history and traditions as you travel

Patagonia is a wild and windswept country, so you’d expect the local food to be more about sustenance rather than flavour, right? Wrong. Patagonian cuisine is among the most delicious in the world, with specialties like Argentinian steaks or the Chilean lamb asado guaranteed to make your mouth water. Chilean empanadas, Cornish pasty-like pastries filled with minced meat, make for a great roadside snack when you’re riding a motorcycle.

Patagonia is crisscrossed by endless gravel trails and tracks offering unlimited freedom if you’re a keen adventure rider longing to get off the tarmac. While some of the main roads connecting the bigger cities and towns are paved, there is no shortage of off-road riding in the mountains and along the glacial lakes and rivers, especially on the Chilean side.

We use cookies on our website to give you the most relevant experience by remembering your preferences and repeat visits. By clicking “Accept”, you consent to the use of ALL the cookies.
ACCEPTRead More
Cookie settings