The Roof of the World

Home to some of the the world’s highest passes, breathtakingly beautiful views, rich local culture and incredible riding – a Himalayan motorcycle tour should be on every bike riders bucket list! 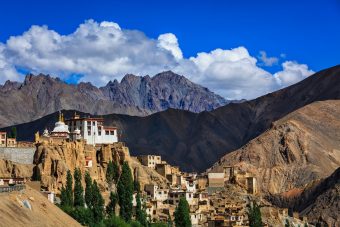 This Royal Enfield motorcycle tour takes in the most spectacular locations and routes of the Ladakh region in the Indian Himalayas. You’ll visit… 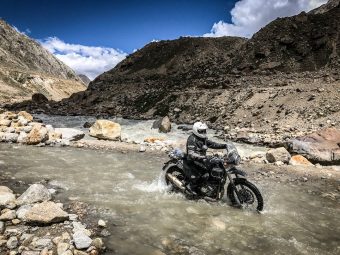 This Himalayan motorbike tour will take you through one of the most stunning parts of the planet – the Spiti Valley. On your… 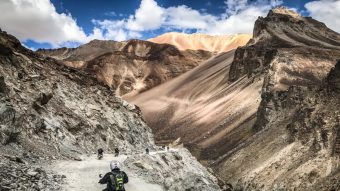 Motorcycle touring through the Himalayan mountains provides breathtaking views around every corner, unique cultural experiences with the amazingly friendly locals and motorcycle riding…

From riding over mightily impressive passes to enjoying deliciously flavourful traditional meals refined over generations, our motorcycle tours through the Himalayas offer experiences like no other. If you're ready for a truly incredible adventure, this is it - the Himalayas are calling your name!

Besides incredible riding, our Himalayan motorcycle tours aim to give riders the most complete off-the-bike experience too, with a wide range of characterful accommodation, visits to spectacular natural and man-made attractions such as the world's highest salt water lake, the highest post office, monasteries, the magnificent Spiti Valley and the opportunity to connect with friendly locals every day.

The local knowledge, experience and professionalism of our Himalayan guides and support staff ensure that our riders are comfortable, happy and as safe as possible during the entire motorcycle tour and we pride ourselves on providing an unmatched level of expertise from start to finish.
Whether you prefer riding big adventure bikes such as the BMW R1250 GS, performance enduro machines like the KTM 450 EXC or the smaller adventure bikes like the Royal Enfield Himalayan… if you’re looking for an incredible ‘off-the-beaten-track’ motorcycle holiday in some of the most stunning & interesting countries on the planet, you’re in the right place. Simply get in touch with us to discuss your preferred motorcycle tour and we’ll take care of the rest, ensuring you have a life changing experience, whichever tour you choose!

What is the riding like on a Himalayan Motorcycle Tour?

While the riding in the Himalayas can technically be classed as ‘on-road riding’, the condition of these roads varies drastically! Some of the roads are 100% dirt & gravel – smooth in places and rough, rutty & rocky in others. Some of the roads are tarmac, but laden with potholes. Some of the roads appear to be perfect tarmac, but will suddenly turn bumpy, or you’ll go around the corner and there’ll be sand across the road. The conditions of the ‘roads’ can change within the blink of an eye, so you need to keep your eye on the ball (which can be difficult when the views are so amazing!). Road works have advanced hugely since we first started running motorcycle tours in the Himalayas and in the Indian Himalayas the average ‘unpaved’ sections of the tours are approximately 30-40%… but as we say – even the condition of the new tarmac roads can be hazardous!

99% of the roads in the Himalayas are far from straight. You’ll encounter countless hairpin turns and twisty bends. The riding is simply phenomenal and every day will leave you grinning from ear to ear!

When is the best time of year for a motorcycle tour in the Himalayas?

The window for motorcycle tours in the Himalayas is very short and this window differs depending on the areas of the mountains. Due to the extreme weather conditions over the winter months and the large amount of snowfall each year, the roads are only open & safe to travel from the end May to September / October (take a look at the individual tours to see what months are best for those). Many people assume that as it is also the monsoon season over these months and it will be extremely rainy during the tour. While this is the case in some regions, it will be completely untrue in others, generally in the higher altitudes.

Generally the earlier months in the motorcycle riding season will have a higher chance of rain, but the temperatures will be warmer. Conditions on the ground will also be wetter as the winter snow melts. This can make for some brilliant & exciting water crossings, but can also cause some rather muddy riding conditions!

The mid-season riding months will usually give the ideal mix of blue skies and moderate temperatures, while the later months give the most spectacular blue skies but lower temperatures and higher chances of snowfall at the higher altitudes.

One thing everyone has to remember when embarking on a motorcycle tour in the Himalayas is: ‘These are the Himalayas”! Conditions can change quickly and often the weather statistics and weather reports will mean absolutely nothing. It’s all part of the adventure!

5 reasons to ride in the Himalayas

The scenery in the Himalayas is simply mind-blowing. You will be hard pushed to find motorcycle tours with such vast and awe inspiring landscapes, while simultaneously being incredibly diverse. You can spend the morning riding through rocky barren mountain passes with numerous hairpin turns, turn a corner and find yourself riding through lush tree lined valleys. This truly is an amazing part of the world which no one can afford to miss!

Be it India, Tibet or Nepal, the culture of the people in the Himalayas will always be an incredibly interesting part of your motorcycle holiday. Monasteries are a common sight on the hillsides, colourful prayer flags blow in the wind and brightly dressed monks stroll the streets spinning payer wheels. Whatever your religious beliefs, there is something very relaxing about witnessing the local cultures in the Himalayas.

One of our favourite things about motorcycle touring are the people we get to meet along the way. Riding motorcycles to remote regions of the Himalayas, we not only come across the locals but also a number of seasonal workers. Although we may not always be able to understand each other we love our roadside chats with the folk we meet along the way.

They don’t all have a lovely job herding goats though… wait until you see the manual labour that goes into building these roads! Now that is hard graft. Feel free to stop occasionally to hand those guys a pack of biscuits or a cigarette – they’ll be extremely grateful.

Indian curries, Tibetan momos, massala dosas, thukpa, flatbreads and chow mein – while the countries that make up the Himalayas all have their own national dishes, you’ll find it all merging together up in the mountains, providing an incredible selection of dishes. We simply love the food in these regions and we’re sure to give our riders the full culinary experience on all of our Himalayan motorcycle tours. Gulab jamun anyone?